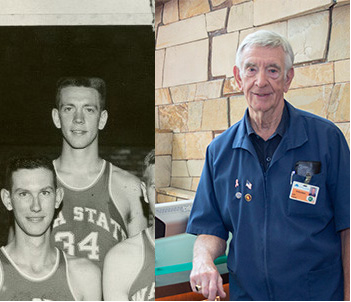 If you’ve frequented the main lobby of Kalispell Regional Medical Center, chances are you’ve bumped into Lyle Frahm, one of the hospital’s front desk volunteers. As a KRMC volunteer, Lyle is always willing to help direct visitors where they need to go or to casually converse with one of the many employees he has gotten to know personally over the years. He has made many friends during his time at KRMC, but few know the full extent of his life story, including his storied background in basketball and some of the incredible encounters he’s had with some of the sport’s greatest stars.

Lyle grew up in Manning, Iowa, a rural town of 1,500 located in the central part of the state. In 1948, when he was in sixth grade, the Manning High School basketball team pulled off a historic upset in the state championship, defeating Davenport High School, a much larger school. At the time, there were no classes separating schools by size and so all schools competed for the same championship. “After that game, hoops went up all over Manning,” Lyle recalls. “That’s what got me into playing basketball.”

After a stellar high school basketball career at Manning in which his teams went a combined 70-5 in four years, Lyle followed in his older brother Stan’s footsteps and played for the Iowa State Cyclones in Ames, Iowa. By his sophomore year, he had established himself as a defensive specialist and was moved into the starting lineup, where he was regularly tasked with guarding the opposing team’s best player under 6’6. That year, the Cyclones finished the season with an 18-5 record, their best season in school history. During his final two seasons, Lyle stepped into a more prominent offensive role as well. He averaged 11 points per game during his final two seasons, helping lead his team to two more winning seasons.

In January 1957, Lyle played a key role in one of the biggest upsets in Iowa State basketball history. The Kansas Jayhawks were the #1 team in the country and were led by future NBA hall of famer Wilt Chamberlain, a seven foot tall phenom and one of the greatest basketball players of all time. Just 19 days earlier, Lyle’s Cyclones had lost a heartbreaker against the Jayhawks in Kansas City on a buzzer beating shot. While the loss was painful, Lyle and the Cyclones were optimistic of the way they played and knew they were capable of beating them.

Iowa State managed to significantly slow down the pace of the game the second time around and held Chamberlain well below his averages. They held a late lead until Chamberlain hit two clutch free throws with less than ten seconds remaining to tie the game. Lyle and the Cyclones had one shot to pull off the upset. It was assumed that Iowa State was going to try to get the ball to their star player, Gary Thompson, for the final shot. However, as Lyle brought the ball up with the final seconds ticking away, he noticed that Thompson wasn’t open and instead dished the ball to Don Metzger, the Cyclone center. Metzger put up a 15-foot shot as time expired and sunk it. “The place went crazy as that shot went in,” Lyle recalls. The crowd rushed the court and triumphantly carried many of the players off the court. Following the game, Lyle remembers Chamberlain and Kansas head coach Dick Harp coming over to the Iowa State locker room to congratulate the victorious Cyclones in a touching display of sportsmanship. It wouldn’t be until 2016 that Iowa State would defeat another top ranked team.

The following season, Lyle’s Cyclones pulled off one more upset of the Jayhawks, which turned out to be Chamberlain’s last loss in college. Chamberlain went on to have a hall of fame career in the NBA and still holds over 70 NBA records today, many of which are considered unbreakable. “It was a thrill to play against such an outstanding player,” says Lyle. “He was such a dominant player because of his skill and his size. I don’t think we had any idea how good of a player he was going to be at the time.”

After graduating from Iowa State, Lyle stayed an additional year in Ames to begin a Master’s Degree in school administration. He was thrilled to stay in Ames because that allowed him to stay close to his girlfriend Darlene until she graduated the following year. Once she did, they got married in her hometown of Evanston, Illinois. He then served two years in the United States Army during which he was stationed at Fort Carson in Colorado Springs. Lyle returned to Iowa State to complete his Master’s Degree two years later and to help out with the school’s athletic department. A short time later, he moved to Illinois where he coached basketball and tennis at Deerfield High School. After four years, he returned to Iowa State as an assistant basketball coach and the head tennis coach.

As a part of the coaching staff, one of Lyle’s responsibilities at the time was to recruit for the Cyclones. He specifically remembers an instance where he traveled to New York City and watched a young Julius Erving play for Roosevelt High School. “He must’ve scored something like 28 points in the half I watched,” Lyle recalls. “Afterwards, I went to the locker room and talked with him and his coach. I asked him to consider Iowa State and invited him to visit the campus.” Erving, who would go on to be known as Dr. J and have a hall of fame career with the Philadelphia 76ers, did take Lyle up on his offer and visited Ames later that year. Ultimately, he ended up choosing a different school, but that wasn’t the last time Lyle interacted with him.

In 1970, Lyle went on to work for Converse in the promotions and sales department. He was assigned to represent the northwest region’s college and professional athletes. At the time, Converse was a major player in the basketball shoe market and featured many top NBA basketball players, including Julius Erving, Larry Bird, and Earvin “Magic” Johnson. Lyle became acquainted with all three, as Converse would regularly feature them for meet and greets at different advertising conventions with coaches and players. Other athletes, such as Don Mattingly of the New York Yankees and Tony Dorsett of the Dallas Cowboys were associates of his as well during his career at Converse.

In 1997, after 27 years with the company, Lyle retired to Bend, Oregon. He and Darlene later moved to the Flathead Valley, where his youngest daughter lives. While his basketball days are over, Lyle still manages to stay active by road biking, an activity he took up in his early fifties. Now, at the age of 83, he bikes three or four times a week when the weather cooperates. Most of his rides are in the 30-40 mile range, but he occasionally goes on some 50-80 mile trips as well. He also tries to get at least a 100-mile trip in every year, something he intends to knock out in the coming weeks with one of his daughters.

On September 5, 2019, Lyle and Darlene celebrated their 60th wedding anniversary. He fondly recalls how he used to follow Darlene around Iowa State’s campus just to hang out with her. “I would be remiss if I didn’t mention how grateful I am to her for the support and love she has given me over the years,” Lyle says. “She needs to be recognized for her support to me and for raising our three beautiful daughters.” Together, the Frahms have enjoyed singing in church choirs all 60 years of their marriage and are presently members of the Columbia Falls Community Choir as well.

Lyle is one of more than 170 active volunteers at KRMC whose goal is to help make guests more comfortable. He has volunteered with KRH for 11 years and in 2015, he was named the Volunteer of the Year. “There are all sorts of talented people from different walks of life that make up the KRMC Volunteer program,” he says. “It’s a very dedicated group that gives their time and talents to benefit the hospital.”

In 2018, volunteers gave a combined 34,155 hours of their time to KRH. “I just feel good at the end of the day being able to help people find their loved ones and make them comfortable,” Lyle continues. To be a part of the rewarding volunteer experience at Kalispell Regional Medical Center, contact the Volunteer Services office at (406) 752-1781 or smiletich@krmc.org.

This is a great time of year to review these topics. Every 5 minutes in the United States, a baby is born with a birth defect. At the top of the list of birth defects are congenital heart defects (CHDs). Demographic studies of congenital heart …
Read more from this release

Kalispell Regional Medical Center (KRMC) was named one of three hospitals in the state of Montana to earn an Overall Hospital Quality five-star rating from the Centers of Medicare & Medicaid Services (CMS). In total, CMS assigned star ratings to …
Read more from this release