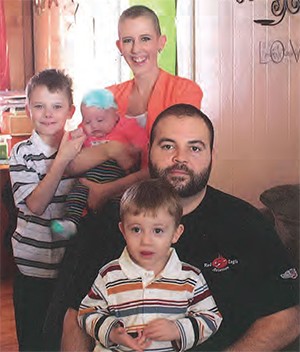 When we think about women who have inspired us throughout time, there are several important women whose names immediately come to our minds. Florence Nightingale was instrumental in changing the role and perception of the nursing profession. Helen Keller overcame the frustration of losing both sight and hearing and then campaigned tirelessly on behalf of the deaf and blind community. Mother Teresa was a global icon for selfless service to others. We all recognize these influential women by name, but many women who inspire us daily are known to us as our mothers, sisters, daughters and/or friends.

Our team at the Montana Perinatal Center, a department of Kalispell Regional Medical Center (KRMC), works with inspiring women every day. When discussing the topic for this month's Montana Woman Magazine, we immediately thought of our patient and friend, Hallie Flores. She had an incredible journey through her pregnancy that impacted all of us greatly. We began caring for Hallie and her unborn daughter the summer of 2015 shortly after opening the center.

Hallie was raised in the Flathead Valley, growing up in Columbia Falls with her younger brother, Paul. From the start, Hallie was raised with exceptional morals and above-standard work ethics. She assisted in the family business, Canyon Archery, and successfully graduated from Columbia Falls High School in 2004. She has been together with her husband, Sean, for years. They are currently raising their three children: Kaleb, who will be 9 years old in February; McClain, who is 2 now; and the acclaimed 4-month-old, Isley.

On June 8, 2015, Hallie received news that no woman or mother should have to hear. Hallie was now four months pregnant with Isley, and she was given the diagnosis that the lump she detected in her breast was most likely cancerous.

Dr. Gina Nelson, her OB provider, was instrumental in caring for Hallie during this difficult diagnosis and getting her in to see Dr. Melissa Hulvat, breast surgical oncologist at the Bass Breast Center at KRMC. It was explained to Hallie and her husband that she had an aggressive form of breast cancer called invasive ductal carcinoma. While this is the most common form of breast cancer, hers was more difficult to treat because it was “triple negative,” which means it would not be responsive to hormone therapy or therapies that target HER2 receptors on the cancer cells.

Given the severity of her disease and the gestational age of her pregnancy, treatment could not be delayed. She met with Dr. Hulvat; Dr. Elise Anderes, her medical oncologist at Northwest Oncology and Hematology; and Dr. Debra Guinn at Montana Perinatal Center. Together, Hallie and her medical team developed a plan to safeguard both Hallie and her unborn baby’s health while treating her cancer. Treating cancer with chemotherapy is complicated during pregnancy, but safer than most people think. We choose the most effective treatment regimen to fight the cancer while monitoring the fetus for any untoward effects. Timing of treatments is important as the medications that are given to the mother pass through the placenta into the fetus. Most fetuses tolerate the medications well. Ideally, there is a window of time where we stop chemotherapy close to term to allow the fetal blood counts to normalize prior to delivery. Every medication is closely monitored for safety. Thankfully, babies who are exposed to chemotherapy in general are not at risk long-term for medical complications.

Hallie started her first round of chemotherapy on June 15. Baby Isley was now 17 weeks along. Every day that Hallie stayed pregnant was a day to celebrate. Many hours were spent in the chemo lab receiving infusions. Throughout her chemo sessions she continued to grow her relationships with the chemo team and her “personal” nurse, Lois. Throughout, Hallie continued to stay positive. She brought laughter and smiles wherever she went. Hallie wouldn't allow cancer to define her, she was still “Hallie” and she was going to beat this cancer. Hallie's infectious positive attitude contributed to making many new friends who were also fighting this horrific disease. These new friends taught her that no matter what happens, there is always something to look forward to. She took this literally and decided that every day she was going to be happy. She never allowed the cancer to take over. Hallie was in control and when she needed support, she had a huge group of people supporting her to lift her back up, including her family, friends and her breast nurse navigators Kim Grindrod and Sandy Shaw.

Hallie would visit the Montana Perinatal Center between two and three times weekly for monitoring. Hallie became part of our family, which our patients often do. We would all know Hallie was here for her appointment because we could hear her joking with Ali Applegate, our lead practice associate.

We would often get the same response, “Living the dream,” when Hallie was asked how she was doing that day. We all looked forward to her ultrasounds. Baby Isley loved to show off on-screen, especially during 3D and 4D ultrasounds performed by our perinatal sonographer, Beth Darnell, ROMS.

Dr. Guinn's plan was to keep Hallie pregnant as long as possible to let her complete as many of her chemotherapy sessions as possible prior to delivery. Isley had other plans. She arrived on October 4 at 10:28 a.m. at 33 weeks gestation. A normal pregnancy routinely goes 39-42 weeks. Isley proved to be a fighter just like her mother. She didn’t require a respirator, only oxygen. Her strength amazed us, and this little miracle baby was immediately loved and adored by everyone. Isley spent 22 days in the Neonatal Intensive Care Unit (NICU) at KRMC. During this time, Dr. Kristin Veneman, a neonatologist at KRMC, told Hallie and her husband that it wouldn't be uncommon for Isley to take two steps forward and then four steps back. The family would have their share of ups and downs. Hallie viewed every day for Isley in the NICU as a miraculous day. If it wouldn't have been for the amazing team of nurses, doctors and support staff, Hallie feels like they wouldn't have come out as well as they did, and Isley would not be thriving the way she is today.

Following the birth of lsley, Hallie underwent her last three courses of chemotherapy. The last three were the hardest as she not only had to take care of herself, but also her newborn in the NICU and her family. Finally, chemotherapy was over and Isley was transitioning to come home. The next step for Hallie was surgery. Dr. Hulvat would perform Hallie’s double mastectomy and sentinel lymph node biopsy. At the same time, Dr. Michelle Spring, a plastic surgeon at Glacier View Plastic Surgery, would perform the first phase of her reconstruction.

They set the date for her surgery on November 18, 2015. Hallie was frightened for the unknown. She had never had major surgery and she almost backed out of surgery a few times. The day of her surgery, fate took over and she saw a familiar face, Kathy, a family friend whom she hadn't seen in more than 10 years. She was there at the surgery center. Hallie felt like this was a sign that everything was going to be okay. After surgery, Hallie received incredible news. She had a complete pathologic response to chemotherapy, meaning her breast cancer was completely gone at the time of her mastectomy. Hallie is cancer-free now, but she keeps the attitude that the journey is never over. She will live with cancer for the rest of her life whether or not it decides to come back.

Hallie shared with Kelli McMahon-Staats, our perinatal nurse coordinator, that her role model who inspires her is her mother. Her mother is her superhero. She has overcome many obstacles even when the odds were completely against her. Two kidney transplants, dialysis and many hours of medical treatments didn't stop her. Hallie's mother gives her the strength and has assisted her throughout her life. “My mother is truly amazing,” Hallie said.

Kelli asked this inspirational lady what she learned from this whole experience, and she said it was “a roller coaster,” a roller coaster that will never end as long as she lives because not only does this experience affect her, but it also affects her family, friends and everyone involved. She has learned that people can surprise you, and she has become humbled by this experience. Hallie stated, “Nothing is guaranteed to any of us, and family is the most important aspect in an individual's life. Cancer created gratitude within me. Gratitude that I woke up every day, gratitude that I got another day with my children and gratitude that against all of the odds my daughter is with us today.”

Hallie would like to thank every single person who has donated, attended the benefit for her in August 2015 and shared her story previously in the Daily Inter Lake. She would like to thank everyone for their time, generosity and kindness. Hallie's story can be shared at www.gofundme.com/floresrecovery. Although she no longer comes to see us except for the occasional visit, for all of us at Montana Perinatal Center, she and Isley will always be in our hearts and prayers.

Originally published in 406 Woman Magazine, October 2018.  “But you don’t look sick,” replied my sister-in-law when I told her and my other close family members that I had breast cancer. Leanne Roberts had arrived in the British Virgin …
Read more

Kalispell Regional Healthcare is proud to introduce the newest additions to the growing line-up of pediatric providers. Pediatric services offered locally include care for infants, children and adolescents in Kalispell and throughout Montana. …
Read more