Guardian of the Month - May 2020
Newsroom 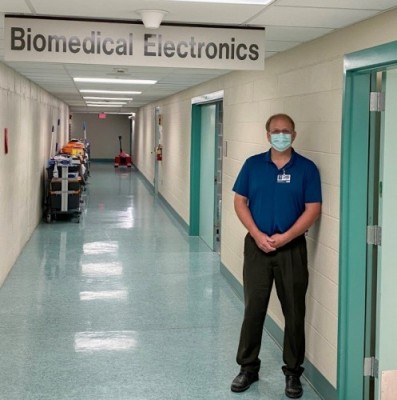 Each month, Kalispell Regional Healthcare (KRH) selects an employee that goes above and beyond to uphold the organization’s core values of integrity, compassion, service, and excellence. That employee is nominated and selected by peers as the Guardian of the Month. In May, Bret Watson, senior biomedical equipment technician was chosen as the recipient.

As a biomedical equipment technician, Bret is tasked with testing, inspecting, and repairing the equipment at KRMC. Bret’s ability to move from one situation to another in a calm, cool, and collected way makes him an exceptional resource for all staff. Serving such a large and diverse organization requires expertise in a variety of different fields and that is something that Bret excels at. “Having a biomed tech who speaks fluently in the languages of mechanical engineering and also medical jargon and patient care is a huge asset in overcoming some of the more obscure problems and scenarios that arise,” says Bret’s nominator.

Bret has been with the organization for over four years. His favorite part of the job is being able to have such a close impact on patients. “There’s a very short line between the work we do and the patients,” he says. “We are put into a unique position to be able to help almost anybody with almost anything at any point in time.”

Born and raised in Kalispell, Bret left when he joined the Air Force where he served for 20 years. He credits his military career with providing him with the diverse exposure that provided him with the skills needed for his current position. After retiring from the Air Force, he spent another 10 years at medical facilities in Florida and Colorado before returning to Kalispell to serve in his current role.

Bret is very thankful for the Biomed team he gets to work with each day and is humbled to be chosen as the Guardian of the Month. “It’s neat to know that you have made an impact on somebody to the point that they wrote a nomination,” he continues. “You never know who you’re going to impact each day. You may not impact the world, but you can make all the difference in the world to those you work with.”

When he’s not at work, you can find Bret spending as much time as he can outdoors. Whether it’s four wheeling, fishing, traveling, hunting, or even just playing with his dogs and hanging out with his wife, he loves to be outside.

Dr. Jason Cohen, chief medical officer of North Valley Hospital, gives an update to KGEZ AM Radio on the current status of COVID-19 in the Flathead Valley.
Read more from this release

Judy Smith, Manager of the North Valley Hospital ER, Special Care Unit, and Seasonal Clinics, talks with KGEZ AM Radio to discuss the new West Glacier Screening Facility and the reasons it was created.
Read more from this release

Dr. Doug Nelson, Chief Medical Officer of Kalispell Regional Healthcare, gives a weekly update on the COVID-19 situation in the Flathead County on KGEZ AM Radio.
Read more from this release