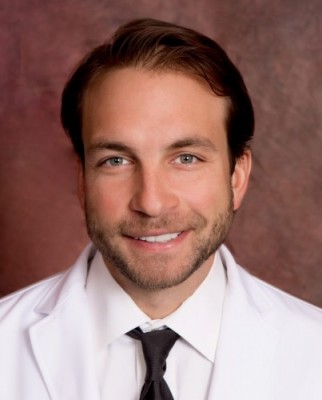 Getting Michael Hromadka to hold still for a minute or two is a bit of a trick, but his clinical assistant, Janelle Borgen, succeeded in getting him to sit down for an interview at Glacier View Plastic Surgery last week.

Dr. Hromadka is a board-certified plastic surgeon who specializes in breast reconstruction, breast augmentation and abdominoplasty. Dr. Hromadka grew up in North Carolina and he was the oldest of four children.

“It was a baseball injury and the resulting sports orthopedic treatment that I received as a kid, that led me to a career in medicine,” he explains.

Dr. Hromadka earned his medical degree from the University of North Carolina School of Medicine in Chapel Hill and it was there that he was exposed to the fascinating world of plastic surgery, which appealed to his artistic and creative nature. He knew he had found his niche. He completed his internship in general surgery and then completed an integrated plastic surgery residency at the University of Oklahoma Health Sciences Center in Oklahoma City.

According to Dr. Hromadka, one of the more rewarding procedures he performs is breast cancer reconstruction for mastectomy patients.

“It is incredibly gratifying to know that a patient has been made to feel whole again after such a difficult diagnosis,” he says.

Skin cancer reconstruction and correcting hooded eyelids are also a large part of the practice. Some of the more challenging surgeries he has performs are burn reconstruction. These surgeries are not only for cosmetic reasons, but also return function to the patient.

An outdoor and adventure enthusiast, Dr. Hromadka found a love of travel when he spent a semester studying in the Galápagos Islands as an undergrad student. He spends his free time training for triathlons, mountain biking, snowboarding, trail running, and backpacking through Glacier National Park. He and a friend traversed the park this past winter, starting at Many Glacier and coming out of the snowy wilderness at Lake McDonald. He has plans for a mountain climbing trek in the Yukon this summer.

Dr. Hromadka lives in Whitefish, with his wife, Lindsey, who is an attorney, and their dog Hazel. They are delighted to be expecting their first child in August. His dad, a retired mechanic, and his mom, a teacher, recently moved to the Flathead Valley. Both are understandably looking forward to being near their first grandchild.

When asked if he has any professional advice for his patients and residents of the Flathead Valley, Dr. Hromadka enthusiastically answers, “Remember to wear sunscreen!”

This artcile was published in the June 2019 issue of Montana Woman.

Listen: Showing Your Heart Some Love

Dr. Sharon Hecker, cardiologist at Rocky Mountain Heart & Lung, talks with KGEZ AM radio about the ways that you can prevent heart disease. On Wednesday, February 26, Dr. Hecker will be hosting a Q&A session at the Summit Medical Fitness Center. …
Read more from this release

Getting Your Heart in Shape with Cardiopulmonary Rehabilitation

February is National Heart Month as designated by the National Heart and Lung and Blood Institute (NHLBI). Also, National Cardiac Rehab Week is in February as well, per the American Association for Cardiovascular and Pulmonary Rehab …
Read more from this release

Listen: The Importance of Vaccines

Dr. John Cole, pediatrician at Sunnyview Pediatrics, stopped by KGEZ AM radio to debunk myths surrounding vaccinations and to emphasis the importance of getting an annual flu shot.
Read more from this release