Asthma used to take her breath away, but now Crystal Romine is breathing easy

Asthma used to take her breath away, but now Crystal Romine is breathing easy 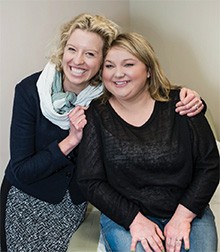 Crystal Romine swept into the coffee shop, full of sass and energy, plopped down at the window-side table and lit up the scene. Her positive vibe belied the story that was to spill out over the next hour.

“I worked for five years at a lumber mill and sucked in the sawdust daily,” said the 36-year-old single mother of three from Kila. “And I was a grader, so I was right on top of it. Then 11 years ago I had a bad asthma attack. I thought it was just a cold, but I ended up in the hospital for four days.”

Thus began Crystal’s journey through the world of nebulizers, steroids, panicked trips to the emergency room, tubes pushing air down her throat, and 10 years of breathing difficulty, sinus problems and a vanished sense of smell.

“And my lungs are so small,” she added. “They didn’t even know until they went in to do this.”

“This” is a newly approved medical procedure that turned out to be her bright light at the end of a long, hard decade.

Bronchial thermoplasty (BT), approved by the U.S. Food and Drug Administration in 2013, was performed for the first time ever at Kalispell Regional Medical Center in September 2015 by specially trained pulmonologist Katarine Egressy, MD, MPH. It treats severe asthma in adults who have had little luck with other interventions.

Shortly after she arrived in Kalispell last September, Dr. Egressy introduced the procedure locally. It involves inserting a flexible bronchoscope through the mouth and into the lungs’ bronchial tubes to deliver mild heat that reduces the amount of excess smooth muscle tissue inside the airways. It means the airways constrict less during asthma attacks that, in turn, are less frequent. Although Crystal and other patients can breathe more easily after BT – completed in three separate outpatient sessions – it doesn’t replace asthma medication.

But it sure does make life better for Crystal and patients like her.

Crystal said she’s lost 50 pounds since she stopped relying so heavily on prednisone. She no longer catches every cold circulating in the valley, so she can be in the crowds for her children’s active sports schedules. She’s no longer anxious about the good-drug/bad-drug dichotomy of prednisone. And, following a sinus surgery by Dr. Kyle Tubbs this January, she can smell again.

“Outcomes are significant,” Dr. Egressy said of the BT procedure. “Forty-seven percent of patients experience improved quality of life, spend less time in the ER, and stop or reduce their use of oral prednisone.” The steroid can become a primary source of relief from severe asthma, but it brings a heavy toll in terms of side effects.

“This is aimed at quality of life improvement,” she emphasized. “For our BT candidates, I select pure cases who have not responded to medical treatment despite the best care, and who don’t respond to oral prednisone.”

FDA approval of bronchial thermoplasty was an answer to a desperate problem in the United States. Dr. Egressy said asthma is a major morbidity factor for men and women of all ages. Asthma care alone in the ER and urgent care clinics carries a $1 billion annual cost.

“Although most asthma cases are well controlled with inhalers and other means, there are about 10 percent of patients who continue showing symptoms,” she said. “They wheeze. They can’t breathe easily so they can’t exercise and they gain weight. They have anxiety. There are many days of work lost. And there’s the significant medical cost.”

Crystal lived all this full-on.

She left the lumber mill after her asthma attack and took a housekeeping job with Kalispell Regional Medical Center. She complied with the job requirement for a hepatitis A/B immunization, and within three days she was in the ER with fluid in her lungs. She awoke a week later to the reality of her newfound allergy to the shot. She also faced a future of medical treatments from pulmonologist Timothy Obermiller, MD. The Kalispell Regional Healthcare doctor, practicing at Rocky Mountain Heart and Lung, confirmed an asthma diagnosis and set about planning a course of treatment.

Crystal left the KRMC housekeeping crew and went back to doing in-home care. It was a line of work she’d relied on for 17 years, even more so since her 2010 divorce when she had to double down on ways to support her children, now 18, 14 and 12.

“My asthma will stay dormant for a long time, and then it rears up,” Crystal said. “I’ll end up in the hospital about twice a year about this time, in the spring, when everyone else is getting sick and I’m working too much. I wait until I’m on my death bed and then I go see Dr. Obermiller.”

Probably not a good course of action, she admitted. “We used to treat it with Z-Paks and nebulizers, but in 2009 I started on prednisone when I started getting sick all the time,” she said. “I would do exacerbations, which is like a panic attack in your lungs.”

Last July, her health worsened. By August she was in the hospital with another asthma attack. She had been going through albuterol inhalers at an alarming rate, to no avail. It was then that Dr. Obermiller introduced Crystal to Dr. Egressy, asking the newly arrived pulmonologist to consider his patient for BT.

Her first treatment on September 17 went well, Crystal said. Two weeks later, swollen lungs that virtually clamped themselves together inside her chest sent her to the ER. Resulting treatment opened up her airways, and she was ready for a second BT procedure on November 17. This one was a challenge.

“I had a full-out asthma attack,” she said. “They had completed the procedure and Dr. Egressy was just doing her cleanup when it happened. When I woke up they were doing the nebulizer and had the IVs ready. They pretty much had me fully loaded and were ready to intubate me.” They stopped when they saw she was awake and would be fine, but kept her overnight for observation.

“After that, I felt awesome,” she said. “I felt there was so much lifted off my shoulders.”

The January 17 surgery was textbook – and a relief to Crystal. The highly social woman had isolated herself for the prior couple of months in order to avoid any sickness that could thwart the third and final session. She was ready to get back in the game.

“Dr. Egressy has changed my life so much. I was completely miserable, but now life’s great,” she said. The depression and emotional bouts are gone, and her energy has returned to the point that she and her youngest daughter take daily walks. “Now I’m super excited to go back to work,” she beamed.

Crystal went from a regimen of eight medicines to zero. The only time medication comes into play is during occasional asthma attacks or infections, when prednisone is needed as part of a backup plan worked out with Dr. Egressy. Coordinated doctor visits have her seeing Dr. Obermiller and Dr. Egressy on the same day as they work to guide her continuing care.

“They are so good to me,” Crystal said. Supported by their expertise and buoyed by successful BT, she already is living a much brighter future. “They make you feel like there is hope.”

Learn more about bronchial thermoplasty at Rocky Mountain Heart and Lung or call (406) 257-8992.

Originally published in 406 Woman Magazine, October 2018.  “But you don’t look sick,” replied my sister-in-law when I told her and my other close family members that I had breast cancer. Leanne Roberts had arrived in the British Virgin …
Read more

Chest wall deformities, or irregularly shaped chests, are common birth defects appearing in about one out of 300-500 children in the United States. These defects can cause shortness of breath, decreased stamina and heart/lung function issues, which …
Read more

I knew I was actively dying

Dr. Greg Adams did not have any history of heart trouble. He ate healthy and was an active runner. As a urologist at Urology Associates, Greg Adams, MD, was seeing patients as normal one day. In an instant, everything was definitely not …
Read more