A mother and daughter battle the big 'C'

A mother and daughter battle the big 'C' 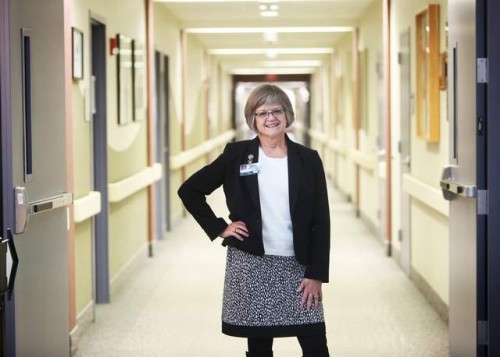 Muffie Thomson got cancer for Christmas. The year was 1992 and she was 38 years old.

A few weeks back, she’d felt a lump. It was about the size of a Jolly Rancher and had the consistency of one too. When she went in for an exam, the nurse told her not to worry. Cancer feels like a pea, the nurse said, nothing like what Thomson had described. And just three months prior, Thomson had a mammogram, which showed no irregularities. Everything, it seemed, was pointing away from cancer.

It was breast cancer, they said, the same disease that had taken her mother’s life when she was just 55 years old. It was a cruel coincidence. Same cancer, same time of year.

“I just remember saying, ‘Get it out of me,’” Thomson recalled.

She had a mastectomy after the new year at Kalispell Regional Medical Center, where she now works as a public affairs coordinator. But back in the 90s, the hospital didn’t have the bevy of services it offers today. She was left wondering: what now?

“We didn’t have a whole coordinated program like we have at the Bass Breast Center now,” Thomson said. “We are so blessed to have what we have … great talent, but they also take all the fear out of it because they say, ‘We’ll take care of you,’ and they do.”

The center provides 12,000 mammograms each year and employs a number of breast specialists, board-certified plastic and reconstructive surgeons, and offers an array of breast imaging services and treatment options.

The technology used to treat breast cancer has improved drastically in the past 25 years since Thomson underwent treatment, and even more remarkably from when her mother was diagnosed in the early 1970s.

“Back in the 70s, she didn’t want to inconvenience us,” Tomson said. “She found her cancer at Christmas and didn’t want anybody to be out of sorts.”

Her mom waited until Thomson and her sisters were back in school before seeking treatment and kept the whole ordeal under wraps – Thomson didn’t even know her mother had the disease until later.

“I was 16 and she handed me the family checkbook and the car keys because she was being treated out of town and said, ‘you’re responsible for your little sister.’” Thomson said. “I was 16, my little sister was 12.”

Thomson drove her younger sibling to and from school and purchased groceries for the family. In other words, she grew up fast.

“I grew up overnight,” she said. “There was no choice.”

While Thomson kept things afloat at home, her mother underwent a radial mastectomy known as a Halsted, where the entire muscle underneath the arm is removed in addition to breast tissue. Doctors took a skin graft from her knee to the top of the hip and sewed it to her chest – hair and all. And although chemotherapy was the recommended protocol following the procedure, for some reason, Thomson said, her mother never received that second layer of treatment.

Six years later, her mother’s cancer returned, and this time, with a vengeance. For the second bout, doctors treated the disease aggressively, using a practice known as the cobalt treatment.

“Cobalt treatment is a form of radiation where they just spray the whole surface – your tissues melt. Literally. That’s how it kills the cancer,” she said.

But by then, it was too little, too late.

“She went into a coma and never came back out,” Thomson said, who was 25 at the time of her mother’s death.

But she’s seen big changes in the way breast cancer is treated from her mother’s time to her own, and into the present day through her work with the hospital.

“The whole theory of cancer has changed where they try to be preventative now, instead of reactionary,” she said.

Modern physicians employ tools like 3-D mammography, MRIs and genetic testing to detect and even predict breast cancer. Advances in drugs have helped reduce symptoms such as nausea, that come as a result of chemotherapy.

It’s no longer a hush-hush diagnosis, either. There are cancer support groups for patients to turn to, high-profile fundraising foundations and community events, such as this month’s Pink Me Up that help to raise funds and awareness about the disease.

“It doesn’t reduce the stress and fear … but the technique and process is so much better now,” Thomson said. “Everything is getting better all the time.”

Shared with permission from the Daily Inter Lake

February 4 is World Cancer Day and so this morning Justin Linam, MD, radiation oncologist at Northwest Montana Radiation Oncology talked with KGEZ AM radio about radiation therapy, its evolution as a cancer treatment, and the collaboration amongst …
Read more